The conversion of my Meteor Swarm game for the Nintendo Entertainment System (NES) is almost complete and has been sent off for Beta testing.
I thought I would give you an idea of what the game is about and how it is running on the NES. 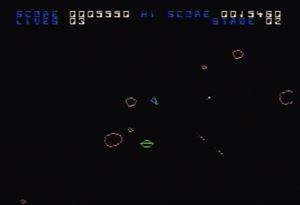 For this demonstration I used my NES II Top Loader and an Everdrive cartridge to play the game. My NES II has not been AV modded so the image is not quite as sharp as it could be.