Well I supposed I have to start somewhere, think of this is the first blinking cursor or hourglass as a long dormant machine slowly comes back to life.

Electric Adventures started many years ago as a channel for myself to create and publish games.

My adventure into the world of computers started with an obscure machines called a TI99-4, that was Texas Instruments answer to the home computer market opened up by the creation of the Apple II, against the like of Commodore and Atari. 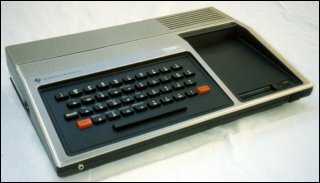 It had an even earlier version of Microsofts basic than the Spectravideo and MSX machines that would come after it.  But for the time it had quite good graphics with 32 x 24 text 16 colours, 40 x 24 text 2 colours  and 256 x 192 and hardware sprites!  Sounds familiar, what was the main processor in the TI-994, but an earlier version of our familiar VPD i.e TMS 9900A but being used as the main processor.

Trouble was the Basic language that came with the machine, was very (very) slow, being a young teen I could not afford the Advanced Basic cartridge that contained automatic sprite movement and collision detection, so I was stuck with what I had.  I remember staying up all one weekend with a friend making a program that would simulate a Saturn V launch, with each stage leading up to a final landing on the moon.  A completely automated sequence, but we made the graphics ourselves and we though it was so cool!  This machine gave me a very good grounding on creating graphics out of programmable character sets.

When I first saw the advertisements for the Spectravideo SV-318 computer, I was amazed at it's feature set, including the use of two processors and all of the RAM it offered, way more than other machines at the time.

After taking home the machine and playing to death the two games that came out at the time of the systems release, I immediately yearned for more games, like the large catalogue of titles available for the Atari and Intelivision consoles, plus of course the hand held game and watch games.

Thus the 1st phase of titles that would later be badged under the name of 'Electric Adventures' was born, all written completely in Basic of course, but a start none the less.

A Spectravideo 328 followed with its larger memory, proper keyboard and associated perhiperals (floppy disk drives) and soon the limitations of just using Basic for the games became too much.  I started extending the Basic by adding automatic sprite movement and collision detection routines in machine code.